My father was very interested in airplanes and flying so growing up I would often fly along with him. I always loved it, but never thought of making it a career. It wasn’t until after college that I made that decision.

One day while my dad and I were out at the hangar, a jet came in to land. My dad looked at me and said, “There’s no reason why you can’t do that!” The rest is history!

The next day I started flying lessons, while also finishing my degree in Social Work. I was a full time college student, I flew after classes and on weekends, and I also worked at the local flight school to help pay for the lessons. 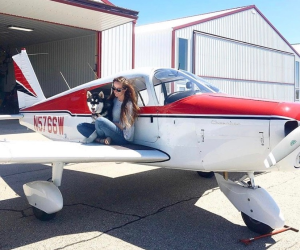 Our dog Nellie, a malamute, was always eager to be my co-pilot in those early days of learning to fly. She was the perfect companion and never got bored with the endless practice flights.

The number on the plane’s tail is it’s unique identification number – the first letter in the ID reveals the country where it is registered. For all U.S.  planes the number begins with the letter “N.”

In this photo the plane is parked on the apron in front of a hangar in Wisconsin where it is stored to protect it from the sun, rain, snow, wind and other weather elements.

Because they are light in weight, small planes like this are usually pushed in and out of the hangar using people power. To steer a plane during the move, a tow bar is attached to the front wheel. You can see a red one on the ground in front of the nose wheel tire. It also doubles as a chock to keep the plane from rolling forward. Chocks are usually wedges of wood or metal but the tow bar works fine and does double duty. I learned early that pilots often must use creative thinking when solving problems.

Take a photo of you and your pet or best friend doing a fun activity together. Share your creation by emailing a copy to muccij@burnsscitech.org.
14 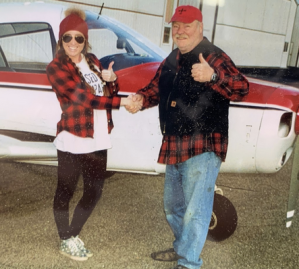 As you can see by our smiling faces, I completed my first solo flight. That was on November 21, 2016. Because it was cold I did not have to suffer the traditional dunking or have my shirt back or shirt tails cut. Instead, my instructor and I just shared a “Thumbs Up.”

Do a web search to see the origins of the thumbs-up sign.

I Become a Pilot 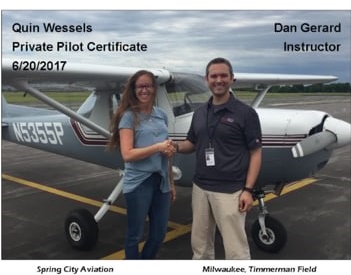 The FAA (Federal Aviation Administration) is the part of the federal government which is responsible for all aspects of civil aviation. Among other things, the FAA makes the all the rules and regulations relating to the licensing of pilots, aircraft and airports.

Pilot training involves both practice in the air and learning through a ground school class. Among other things, I also had to pass a written exam, flight test, and physical exam.

Here’s how I did it:

It took Quin approximately seven  months from soloing to getting her Private Pilot’s License. At that time, what percentage of her life did that represent? 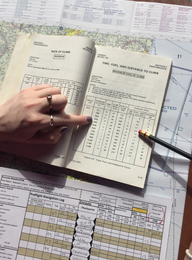 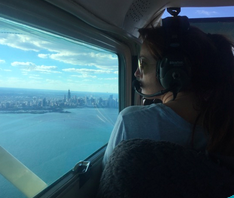 To become a private pilot, a person must prove to a certified flight instructor that he or she is able to perform the following flying skills:

Finding Info for a Flight Plan

These are the major topics covered in a ground school course:

Any of the topics by doing a web search for them.

After I earned my Private Pilot license, I had much fun taking friends and family on flights. This time, to celebrate my birthday, I flew my BFFs in a Cessna 172 to a nearby airfield to get a yummy burger at a restaurant.

Also visible in this photo are parts of the plane designed to deal with the forces that affect it in flight:

Do some research and then design an airplane of your own. Share your creation by emailing a copy to muccij@burnsscitech.org. 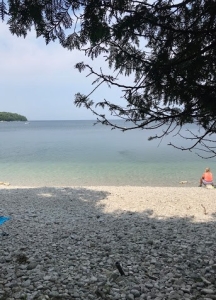 During the summer of 2018, after I earned my private pilot’s license, we took the Cherokee up to Washington Island, WI. The airport there has bicycles for visiting pilots to borrow. We rode to the beach, to town for food and then to a lavender field to get ice cream! Lavender ice cream is surprisingly good.

You’ll notice the beach is made up of rocks–not sand, like the beaches in Florida.The small rocks were glacier-polished over thousands of years and are each small geological treasures. In fact, souvenir hunters carried off so many of the rocks there is now a steep fine for removing one.

It was a beautiful clear day – perfect for VFR flying. VFR (Visual Flight Rules) are the basic see-and-avoid rules used by all pilots in good weather and in airspace that is not being controlled by ATC (Air Traffic Control). A pilot who has earned an IFR (Instrument Flight Rules) rating can fly, relying on the plane’s instruments, when weather or air traffic conditions require more than just a pilot’s eyesight or when the flight will be in controlled airspace.

Make a list of places in Florida you would like to visit. Until you can get there in person, check them out on the web.