After getting my Instrument rating, I earned a CFI (Certified Flight Instructor) rating for single-engine aircraft.

Tech and I posed in front of the Cessna 172 that I often used to teach others to fly. When I did that, I was able to “build time” or add to my total number of flying hours even as I was flying with them as an instructor. Building time is important to anyone wanting a career in commercial aviation because the major airlines require at least 1500 hours of flying experience.

In the background you can see a tall white pole with an orange box on top. It seems to be coming out of the wing of the plane but it is really several hundred feet away and anchored in the ground.

Inside the box at the top of the pole is a flashing rotating beacon that helps pilots visually locate airports, especially at night. By the colors and patterns it also identifies what kind of airport it is: civilian land, military, water or heliport.

If Quin could fly an average of 4 hours per day for 5 days per week, how many weeks would it take for her to have enough flying time to apply to a major airline?

We Move on to Multi-Engines 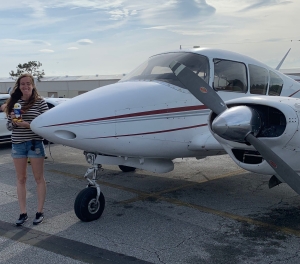 The next step was to earn a Multi-engine Commercial license.  Additional training is needed to fly these kinds of planes, not only because they have two engines, advanced propellor systems and retractable landing gear but also because they require special handling if one of the engines should fail in flight.

In this photo, I’m showing Tech the Piper Geronimo. It is really an upgraded and modernized version of the Piper Apache. I did most of my multi-engine work in this plane.

If the Geronimo holds 108 gallons of fuel, burns about 20 gallons per hour, and cruises at a speed of 130 miles per hour, how many gallons would it take to fly from Orlando, FL to Key West, FL?

Over the Florida Keys

Being a multi-engine instructor had many side benefits such as free travel.  I once had a student who needed to build multi-engine time before he could apply to the airlines. He hired me as an instructor to fly with him to Key West and our route took us along the Florida Keys. This photo was taken from the cockpit on that day.

Approximately 1,700 islands make up the Florida Keys archipelago.  This group of islands extends over 198 square miles, from the Soldier Keys to the Dry Tortugas. Today the total land area of the all the Keys is 137.3 square miles.

The different colors you see are actually the sea floor – the light is sand and the darker is sea grass and other vegetation.  Just offshore is the second largest coral reef system in the world but it is under extreme stress from warming temperatures and chemical pollution from human activities.

If the land area of the islands that make up the Florida Keys were equally divided, what would be the average size of each island?

During a training trip to Key West, my student and I took time out to do some sightseeing. In this photo, I’m standing next to an anchored concrete buoy near the “Southernmost Point in the Continental U.S.A.”  This landmark was established as a tourist attraction in 1983 and has become one of the most visited and photographed places in Key West.

In the center of the yellow triangle on the buoy is a Queen Conch shell. Although now endangered, this mollusk was once so plentiful that Key West became nicknamed “The Conch Republic.” Even today the local residents proudly call themselves Conchs.

If BST school is about 390 miles from the  buoy in the photo, how far is BST from Cuba?

This photo, taken in Key West, gives me a chance to a talk about airplanes and about another of my hobbies – snapping photos.  Although I didn’t take this one, I wish I had. (But I was there; I’m the one in the hammock).

Because the airplane is framed on the bottom by the hammock and the top by the palm leaves, it is  a much more interesting photo than a close-up of the blue and white plane itself. The photo is also made more interesting because of the contrast between the soft, relaxed lines of the young woman in the hammock and the straight, sleek lines of the plane and the horizon.

Now about the plane. It is a Pilatus PC-12 turboprop, made in Switzerland. It is often used for transport, surveillance and even search and rescue. Although some consider it one of the greatest single-engine planes ever built, I don’t think I’ll be buying one anytime soon. The list price of the basic model is $4 million.

Enter a photography contest for kids like this one.